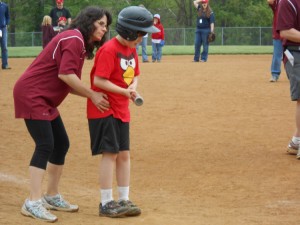 SleepSafe® Beds now provides the major sponsorship for the two local teams — the Franklin County Challengers and the Rocky Mount Rockies — she said, but as the program grows more sponsorship is needed.

Youth with disabilities have few opportunities to play a sport and enjoy the camaraderie, pride and self-esteem that come with participation.

The Challenger Little League provides that opportunity, giving kids a chance to be on a baseball team in Franklin County.

Catrina Medlin, who has three autistic children and is one of the league’s organizers, said the program is very popular in Roanoke with eight teams and more than 100 players.

“We grew (in Franklin County) from 12 to 15 players (last year) to 34 this year with two teams,” she said. “It has grown quite significantly. We can probably grow to Roanoke’s level in five years.”

It may just be a matter of getting the word out, she said.

Challenger baseball enables boys and girls, ages 5 to 18, with physical and mental challenges to enjoy the game of baseball.

It is an international program, the fastest growing division in Little League, with more than 1,800 teams and nearly 27,000 players.

“All children get to play, regardless of their disabilities,” she said. “It is designed for them to have fun and be included in a baseball program.”

Medlin, who is also one of the coaches, said it has been a great boon for her children, who are ages 7, 10 and 22.

“These kids come to a game and they are always happy,” she said. “With all they have to go through and all the obstacles they have to overcome, they just want to have fun and enjoy life just like any other child does.”

For most of the kids, it’s the first time they have ever been able to participate in a game, she said, and some have “never been included, never played, never had a chance at all to be highlighted or recognized.”

“Every child gets to bat, and there is no three strikes and you are out,” she said. “They always get to run the bases. We bring the game to the child, not the child to the game. We cheer as if they are playing the World Series.”

The league, which plays May through June, also spends a day visiting the Salem Red Sox.

“They host a clinic for us every year,” she said. “They meet and greet with our players, give them tips, take photos and sign autographs. The kids have a ball with it.”

Other activities are also included.

“In May and June, we play but then we do extra things,” she said. “There is a party and then a banquet in September to give out trophies.”

“To see their little faces when we give out awards is priceless,” she said.

Joey J. Hodges, another league organizer who also runs a towing service, provides a rollback to serve as a float for the kids.

The program is for kids ages 5 to 18, but they can play up to age 22 if they are still in school and have an IEP (Individual Education Plan), Medlin said.

“We try to keep the program as free as possible through sponsorships and donations,” she said. “Many of the kids’ medical needs are expensive.”

SleepSafe Beds now provides the major sponsorship for the two local teams — the Franklin County Challengers and the Rocky Mount Rockies — she said, but as the program grows more sponsorship is needed.

Besides Medlin and Hodges, Terry Miller with the county’s parks and recreation department helps with the program. Sharon Mullen helps with the volunteer coaches.

Miller can be contacted at 483-9293 for information or to get involved with sponsorship.

Registration for next year’s season begins at the end of February, and fundraisers are planned to pay for the kids’ trip to Virginia Beach.

“It’s just a phenomenal program for these kids and there’s nothing else here for them,” she said. “It’s been such a blessing. It’s not just a baseball team, it’s a child’s well-being.

“I feel like the luckiest coach in the world getting to work with these kids,” she added. “To know them is to love them.”