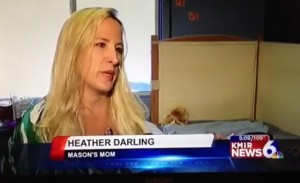 A mother is trying to get a special bed for her 2-year-old boy who has multiple disabilities.

But she is struggling to have her insurance pay for it. She reached out to KMIR6 to investigate.

Two-year-old Mason has hundreds of seizures some days, his mother constantly worries about his safety in the bed.

We spoke with several of Mason’s doctors who say having the right bed is vital to Mason’s comfort and safety.

Mason Darling spends most of his days in a bed, hooked up to machines that help him eat and breathe.

“Mason was born with Pierre Robin Syndrome which is a cleft pallet and a small chin which makes it hard for him to breath, so we struggled with cerebral palsy. And he also has Lennox-Gastaut which is an intractable epilepsy disorder,” said Mason’s mother, Heather Darling.

“He could aspirate because he has a trach and that could mean several days to months in the hospital so an adjustable bed will prevent that from happening as much,” said Heather.

The SleepSafe® bed would help, but they are expensive. Since January, Heather has been trying to get her insurance company, Anthem Blue Cross, to cover the bed.

“Every time you get a denial it’s discomforting because that just sets him up for more injuries or more hospitalizations,” said Heather.

Heather showed us letters from doctor after doctor from Loma Linda, to Children’s Hospital Los Angeles and here in the valley saying this bed is medically necessary.

The letters were sent to Blue Cross.

“They’re putting themselves at risk for more claims and hospital bills and why would you want to keep that from my son,” said Heather.

Anthem Blue Cross told us clients can appeal to have an independent third-party medical expert review their case.

Heather told me Blue Cross called and told her that just Friday, after KMIR6 began researching this story.

“It’s really important for Mason to have this bed so that he can sleep safely and so that we can sleep soundly,” said Heather.

While the Darling family waits for the insurance appeal, they’ve started a fund to help pay for the SleepSafe® bed for Mason.

If you want to help, you can donate to “Mason Darling Bed Fund” at the Wells Fargo branch in Palm Desert.

We also spoke with the company that makes the bed, and they told us they’ll do everything they can to facilitate and expedite Mason getting a bed.